Plastic is ubiquitously known as one of the most popular and durable raw materials. It is also one of the most harmful materials damaging the environment, public health and animals. Plastic is basically made of materials such as coal, gas or oil that undergo a polymerization process. Then plastic is made from these polymers mixed with coloring agents and stabilizers. The plastic industry is enormous and it is involved in almost every facet of our daily lives, from packaging of food products through infrastructure, tools, clothing, electronics, automotive and building industries. Plastic is involved in industries and products that seem to be irreplaceable. The production of plastic materials currently stands at 348 million tons a year, with China being the lead producer and Germany following in second place. The production process itself is energy draining and involves the use of various polluting chemical substances.

Plastic was designed for long-term imperishability and so its products are extremely durable and break down at a slower pace than other waste components make it almost non-degradable. This leads to plastic pile-ups in landfills since the plastic waste does not break up. Treating these piles of trash is problematic as burning them releases toxic gases. Plastic recycling is also problematic and expensive mainly due to the low price of the raw materials and the expensive process of recycling back to it. So, in truth there is no economic feasibility for recycling plastic.

Recycled plastic can be used to make garden furniture, crates, deck, and a variety of products, but the recycling product is not suitable for the packaging industry – the largest consumer of raw materials, bottles, tools and infrastructure (pipes). Therefore, in many cases, the most convenient solution of discarding plastic is to bury it or throw it into the sea. This, of course, is not a solution since we are hiding the nuisance instead of treating it. Hence that’s what makes the plastic problem a global problem, one that crosses borders and has a huge impact on ecosystems, primarily the seas and oceans.

The oceans have long been turned into the trash bin of humanity. Each year, about 12 million tons of plastic are poured into the oceans, together with millions of tons of other pollutants. Plastic, seems to have the greatest impact.

In the Pacific Ocean there exist two islands made of vast plastic waste. The largest area is 1.6 million square kilometers. Garbage is swept into these areas by sea currents after being dropped from ships. Turbulent currents concentrate waste in two regions on both sides of the ocean. (See map).

Plastic is a slowly biodegradable material – it takes hundreds of years to break up and its decomposition process includes a micro-plastic particle. This microplastic particle is often mistaken as food by aquatic life and consumed by marine animals. In this way it also reaches our plates for consumption.

Another plastic waste problem is that of entanglement. Many marine creatures are entangled in plastic waste, including nets, ropes, plastic bags, they may be strangled or starve and die with great suffering. Large animals mistakenly think of the plastic particles and the plastic bags as prey, swallow them and die from gastric fillings. Some of the waste is swept away by the wind and by the waves and end up on beaches.

Over the years, efforts have been made to deal with the plastic problem in the oceans. New projects are being announced and various facilities to have been created for its collection. But these actions are almost immeasurably small in relation to the rate of pollution and plastic dumping to the sea. This is especially true in the developing world where Third World countries dump waste into river ways that lead to the oceans.

Recently, the European Parliament has decided to ban the sale of disposable plastic products such as plates, cups, straws, cutlery and plastic bags. That is a start. However plastic use and in particular plastic single use for products that are used once and then discarded is everywhere. There are countries that have already begun to reduce the use of plastics to a point of a total ban. But it is still a long way until a total annihilation of this material is foreseeable. 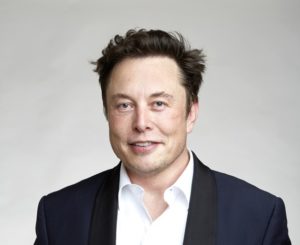 Elon Musk is an American entrepreneur and businessman. Beyond the profit margins of his various ventures, what motivates Musk is his vision. He aims to