The search for green, renewable energy sources that do not harm the environment, gives rise to brilliant ideas every few years that propels us forward. These ideas are not always accepted and it sometimes takes many years to put them into practical use. The same was true of an idea led by a physicist named Philip Carlson in 1976 and used as a basis for the development of unique technology by Prof. Dan Zaslavsky of the Technion in Haifa.

Zaslawski’s team developed a system that produces a lot of energy using hot air  existing in hot climates, even at night (when the sun’s radiation disappears), which gives it an advantage over normal solar energy. Along the way, the system is also used for seawater desalination and air conditioning for thousands of buildings located in the same desert environment. In 1989, Zaslavsky’s research invested about $ 10 million in this technological development.

The system is called Energy tower / “Hot air chimney”, and it takes advantage of the physical principle that cold air is heavy and tends to sink downwards, while hot air is light and tends to rise upwards. At the base of the system, a large chimney, is over 1000 meters high and 400 meters wide. The chimney is placed in a warm desert climate (heat all year round), near the latitude 30. The chimney is placed close to a source of water – salty sea.

The hot air chimney will cause the air inside it, which is at a high temperature, to rise upwards. Seawater is pumped to the top of the chimney and sprayed. The water droplets falling downwards collide with the hot air and the water evaporates. The evaporation of water (which releases latent heat) causes the air to cool down at once and begin to sink to the bottom of the chimney (due to its weight). The cold air, which moves down at a speed of over 80 km / h, passes through wind turbines and propels them, thus generating electricity. The colder air can also be used as a natural air conditioner (desert cooler) and run through air conditioning tunnels to cool large spaces.

The salt water evaporating and condensing in the process, lose their salts and about 50% of them become fresh water (desalination plant). In total, 30% of the energy is used to pump further water, while 45% is used to generate electricity that is enough for a city of up to 1,000,000 residents.

Such facilities, unfortunately, do not yet exist in the world, but a number of successful attempts have been made in Israel for the idea, which are mainly used for cooling (I do not know if they are still operating). One, at Kibbutz Neot Smadar (see photo), and the other at Sde Boker College.

Additional information can be learned at the following link: 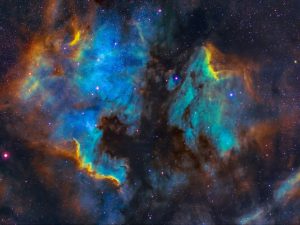 The coldest place in the observable universe