As my son watched the Teenage Mutant Ninja Turtles series, he suddenly remembered that Dad also works with mutations. He began to ask questions about how the mutagen (the cause of the mutation) works. I decided to show him one of the most important mutagens affecting our planet Earth: the sun.

Suffice it to say my boy was disappointed, isn’t there anything else? More exciting? Some greenish oozing chemical that will turn a turtle into a ninja turtle?

As I considered it, I realized that there is … well sort of… but like anything in life it is complicated and requires a complex explanation. Here’s my attempt to simplify things:

The sun distributes a host of rays that reach Earth, including light and UV radiation. This is the same radiation that tans us on the beach for which we apply sun screen and other protective measures. We know that we need to protect ourselves from UV radiation because it has the potential to cause cancer, more precisely – melanoma (skin cancer).

Both UV radiation and ionizing radiation cause cancer because they break DNA. Ionizing Radiation is radioactive radiation such as the type released in the Chernobyl nuclear accident. DNA is the hereditary material that is responsible for the cell-building plan in our bodies. The DNA looks like a long lanyard. It can be divided into sections according to the features for which each section encodes. Each such section is called a gene and each gene is responsible for a different feature. For example, one gene is responsible for eye color, another for color vision, a gene responsible for tasting sweet flavors and so on. A defect in a gene can manifest itself as a hereditary disease. For example, the DMD muscular dystrophy disease is manifested through a gene defect in dystrophin. In ALS (Steven Hawking’s disease) the defective gene is called SOD1, and so on.

The DNA consists of four nucleotide base types- A, T, G, C. Three nucleotides encode one amino acid and multiple amino acids make up a protein. If a single nucleotide is deleted the gene will be removed from the “reading frame”.

In the following example (Figure 1) we will see how this happens:

The upper sequence encodes the amino acid sequence MADA while deletion of the nucleotide T caused the sequence distortion to form a completely different protein.

When ionizing radiation hits the DNA, it breaks it. Our body cells immediately repair the DNA and this is where the problem begins. There are two repair routes:

When exposed to the sun, UV radiation breaks DNA in our skin cells and corrects it by non-homologous recombination. But this is a very inaccurate repair pathway. In fact, this causes mutations. When our cells repair the DNA by adding a base or removing a base, they are effectively creating mutations. If for example, there is a mutation in the gene responsible for cell division, which means that the damaged cell will begin to multiple indefinitely, a cancerous tumor will be created.

The following picture (Figure 2) shows two transgenic plants with a damaged gene. Given fragmented DNA may affect the gene, the corrected gene (GUS) displays a blue color and can serve as a bio-indicator. The higher the radiation level more blue spots appear as can be seen in part c of the figure:

These plants were dispersed in different areas of Chernobyl and provided a long-term radiation index. In doing so, they also prove that a DNA fragmentation can cause not only damage, but can also be a means of repair!

In my opinion, this the most important takeaway point, if we create a DNA fragment in the right place, a defective gene can be repaired. Moreover, many diseases can be cured by the destruction of a defective gene, I’ll address more on this in future posts. 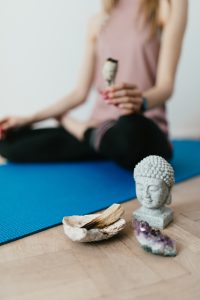 The Sonoran desert toad’s defense mechanism is the secretion of a poison that contains 5-MeO-DMT, lethal enough to kill an adult dog and to cause 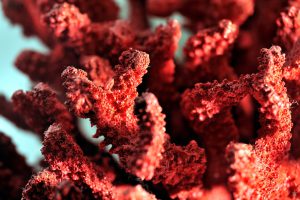 Mediterranean corals are in danger because of climate change