The Lake Kinneret Ecosystem has undergone significant modification since mid-1980`s which particularly were: The previous trophic status of Phosphorus limitation was modified to Nitrogen limitation; the long-term domination of Peridinium gatunenze (PRG) was declined and replaced by Cyanobacteria, Chlorophytes and Diatoms. The distribution enhancement of Harmful Cyanobacteria (HFCB) in Lake Kinneret initiated in summer 1994 when a bloom of Aphanizomenon ovalisporum was documented followed by several studies about the outbreak of HFCB were carried out (Gophen et al 1999; Hadas et al 2012). Despite precaution signals that were publicized since 1987, no special attendances were given to it prior to the outbreak. Nevertheless, supportive background conditions which potentially might enhance similar ecological changes were indicated (Serruya et al 1980). The significance of PRG demands for Nitrogen were documented (LKDB 1970-2020; Serruya 1978, Serruya et al 1980). Moreover the unlimited source of Phosphorus for the PRG growth in lake Kinneret sediments through cysts dormancy was also widely documented (Seruya et al 1980).The progressive promoted of the process of N/P mass ratio decline and its critical impact on the Kinneret invasion by N2-fixing HFCB was studied thoroughly and documented afterwards (Gophen et al 1999;Hadas et al 2012.). Independent other studies and monitored data were published about Climate Condition Changes in the Kinneret watershed causing decline of rainfall and consequently lower headwaters discharges and diminished loads of lake nutrient inputs (LKDB 1970-2020; Hula Project 1994-2018). Consequently, the Nitrogen deficiency accompanied by Phosphorus sufficiency conditions which are well known and warmly accepted by the international community of limnologists as supporter of HFCB blooming. were also confirmed causation in the Kinneret 1994`s case.

The close and far history of the Hula Valley and Peat-soil structure were crucial part of the Hula Project research and widely presented in scientific papers and annual reports (Hula Project 1964-2018). The role of Molybdenum as cofactor within the biochemical process of the Nitrogenase, Nitrogen fixation process and the competitive value, of the anion SO4-2 on it, in marine, brackish, saline lakes and fresh-waters (Howarth, and Cole 1985;Marino et al 1999; Marino and Haworth 2016; Joshi and Lealand 2022) is well known and documented since early 1980`s. Although, Nitrogen deficiency and Phosphorus sufficiency resulting outbreak of HFCB as well as the Mo (as MoO4-2 ) availability (Nishri et al 2002) affected by the hinder SO4-2 were all confirmed solely but were never attended simultaneously for the Kinneret case of HFCB outbreak. A renovated evaluation of the case of the N2-Fixer HFCB invasion to Lake Kinneret where all the previously presented as confirmed parameters solely are combined.

Before the HFCB outbreak (1994), sporadic low densities of non-toxic-N2 fixing Cyanobacteria were recorded in lake Kinneret rarely accompanied by with other toxic species. Reevaluation of the lake and its watershed ecosystems data highlighted an additional potential supporter of the process  which is, reduction of Sulfate (SO42-) concentration. Climate condition changes resulted in Sulfate input reduction into Lake Kinneret. An awareness to the potential competitive interaction between SO42 and Molybdenum (MoO42-) predicted as an enhancement of HFCB growth rate initiated the present study. The Peat soil in the Hula valley contain vast load of Gypsum which is an effective supplier of SO4-2 to Lake Kinneret. The purpose of the present survey is to evaluate optional capabilities of ecological opportunities such as supplemental SO42- aimed at strengthening competition with MoO4-2  to suppress N2 -Fixer Cyanobacterium. Extra potential sources of SO4-2 are deep boreholes (namely “Shamir drills”) artesian flows and sub-lacustrine gushing out through the Lake Kinneret bottom sediments. The SO4-2 concentration in the Shamir drill waters is varied between 600-650 and 9.4 – 10.2 ppm and µM respectively. The SO42- source within the Hula Valley are Peat soil which contain high content of Gypsum (CaSO4). The anthropogenic activity of agricultural cultivation, irrigation and drainage in the Hula Valley enhance Gypsum dissolution and SO4-2  drifting down stream. The hydrological structure is directing these drifted substances towards the Jordan River continuing downstream into Lake Kinneret. 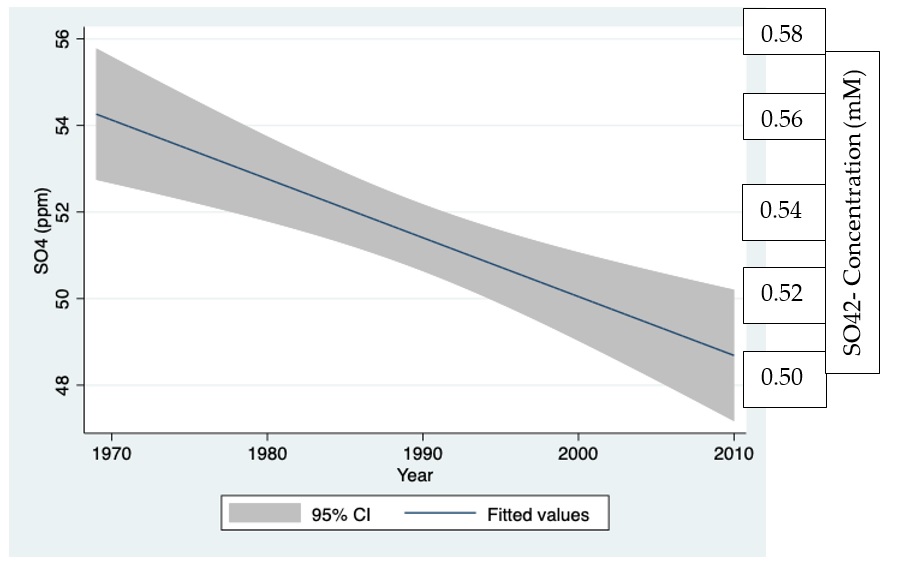 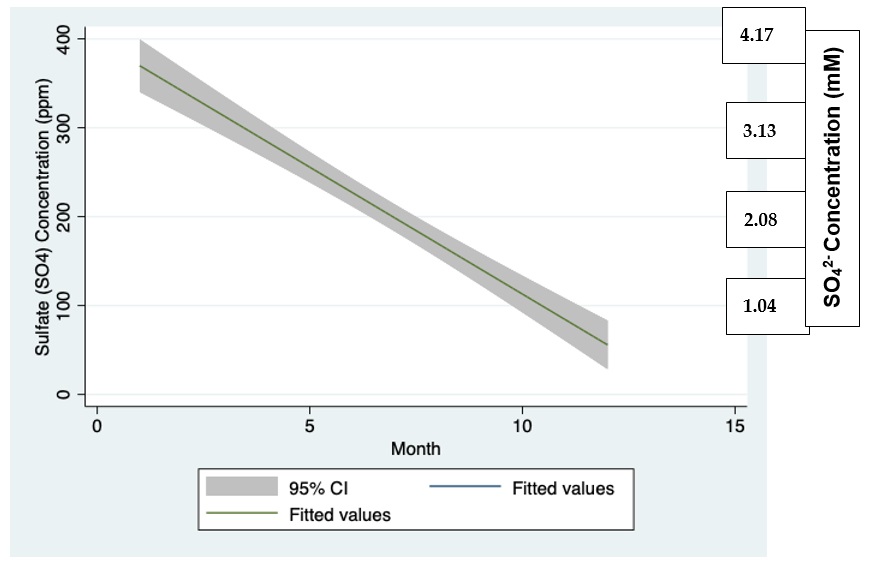 Figure 2: Seasonal (monthly) changes of averaged concentrations (ppm; mM) of SO42- of all sampling stations within the Hula Valley during 1994-2010.

Data given in in Figure 2 indicates significant seasonal decline of SO42-concentration in runoff waters in the Hula Valley in summer when soil moisture is low. 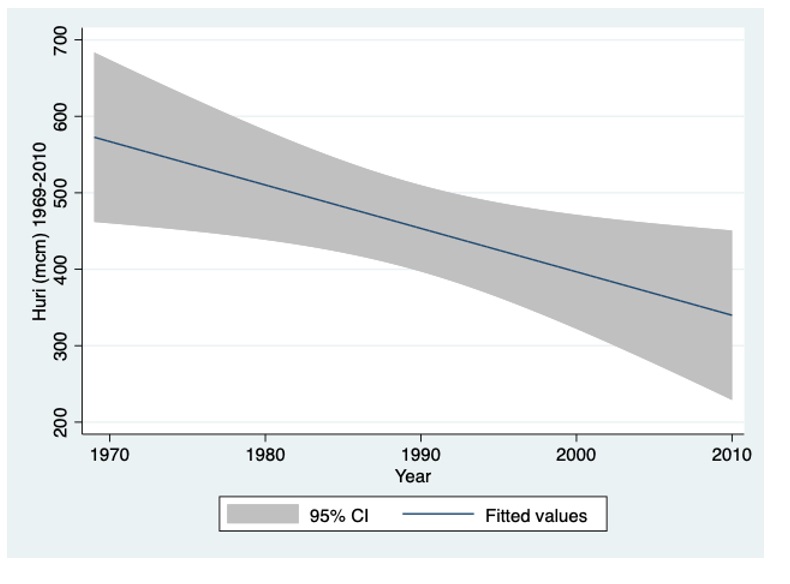 Data shown in Figure 4 confirm loads decline in the lake during summer months.

Conclusively, changes in climate condition resulted a decline of rainfall and headwater discharges in the watershed, and consequently, seasonal inputs of SO42–  which are normally decline in summer when soil moisture diminish and furthermore reduced under dryness conditions. Concentrations of SO42– during early 1990`s, particularly in summer were exceptionally low probably improved MoO42- availability  and consequently HFCB growth rate.

The invasion of the N2-Fixer Cyanobacterium Aphanizomenon ovalisporum  was attributed to the advanced simultaneous development of Nitrogen deficiency and Phosphorus sufficiency (decline of N/P mass ratio). Although reduction of N/P ratio supports a significant factor for HFCB enhancement (Smith 1982; 1983) the present study suggest a consideration of MoO42- availability and its chemical relation with SO42- concentrations as a partial stressor too. Previously published studies confirmed the competitiveness relation between MoO42- and SO42–. The anion of SO42-  is very common in the Kinneret watershed, mostly released by dissolution of Gypsum (CaSO4): CaSO4.  —>  Ca2+ + SO42– in the Peat Soil in the Hula Valley. The linkage between Sulfate transportation to Lake Kinneret initiated the need to evaluate the potential impact of its quantitative range on MoO42- uptake by HFCB. Results given in this paper confirmed a reduction of SO42- input into Lake Kinneret which followed the reduction of river discharge, dryness trend in the Hula Peat-Land and lowering its concentration in the lake. Several studies confirmed enhancement and diminishment of MoO42- uptake by HFCB as correlated with SO42- availability (Howarth, and Cole 1985;Marino et al 19909; Marino and Haworth 2016; Joshi and Lealnd 2022). Increase of SO42-  concentration might suppress MoO42- uptake and consequently slow down Nitrogen fixation by HFCB which is their ecological advantage. Reversibly, SO42- deficiency improve the activity of HFCB`s Nitrogen Fixation through improvement of Nitrogenase activity enabling growth rate maintenance improvement. These interactions are probably the Lake Kinneret case of A. ovalisporum outbreak in summer 1994 together with earlier Nitrogen deficiency development. The seasonal lowest availabilities of SO42- and its input range as routinely documented in past and present occur during summer months. Eventually, summer season was the time in which the HFCB outbreak was documented. Moreover, the Nitrogen diminishment damaged the Peridinium growth rate and Nitrogen fixation, supplemented by the MoO42- competitor- SO42-, enhanced HFCB. The complexity of the ecological interactions includes Nitrogen, Phosphorus, MoO42- and Sulfate availabilities which encourges future management to design a wider consideration combined with all of them although previously were only solely attended, Nitrogen and Phosphorus.

Previous studies confirmed long term progressively promoted process of Nitrogen deficiency and  Phosphorus sufficiency which enhanced during the early 1990`s the invasion of Lake Kinneret by the  N2-Fixer Cyanobacterium Aphanizomenon ovalisporum. Recent awareness suggested that simultaneous decline of SO42- input into Lake Kinneret followed by diminishing of its concentration during early 1990`s supported the outbreak of this Cyanobacteria. 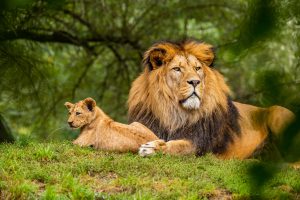 The Barabaig tribe – from hunters to lion defenders

The Barabaig tribe live in Ruaha National Park, Tanzania. The lions in the park were hunted by the tribe in fear for their herds and 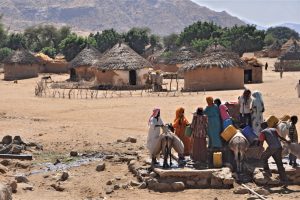 Security in the Shadow of Climate Change in the Sahel / Dr. Haim Koren and Gideon Behar

The Sahel[1] zone in Africa is one of the most sensitive area in the world to climate changes and desertification processes. Currently, it is experiencing extremely 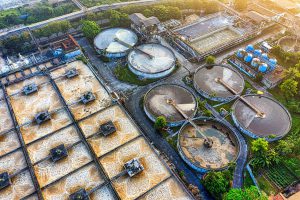 The end to the sea of Galilee’s water level drop

Water level drop in the sea of Galilee has been a problem for many years due to water suction and drought. Israel is at the