As the number of people in the world grows, there are more and more mouths to feed. Meat products (poultry, beef, lamb, and pork) are a good source of protein and cater to various groups in the population, from growing meat for self-consumption in poor third-world and nomadic populations, through fast food consumers to gourmet foodies. Meat production for the food industry creates major ecological, environmental and moral implications that must be considered.

According to a UN report, US residents are the world’s largest meat consumers with a record of 95 kg of meat per person per year. Third world countries consume the least meat with average of 3-4 kg per capita per year.

The meat industry raises about 1.7 billion heads of cattle, about a billion pigs, about 25 billion chickens and about 2.5 billion goats and sheep every year. All these are farmed in order to feed 7.5 billion people.

The meat industry is considered a very wasteful and polluting industry. To grow one cow, 50,000 Liters of freshwater per year are required. The water is used but also adds pollution to the environment through soil contaminating urine, antibacterial agents and other pollutants that flow into streams, and reach our drinking water.  The cow eats dozens of tons of food and emits carbon dioxide and methane (greenhouse gases) at rates 50% higher than a bus.

Additionally, most of the cow’s body parts are not consumed rather raw materials that are not consumed are buried and become polluting waste. This makes the cow one of the most polluting threats to the atmosphere, soil and water reservoirs. In this aspect, the pig can be considered a more ecologically “efficient” animal. Its food intake is versatile and most of the pig is consumed. However, both cases are significant sources of pollution.

Intensive breeding of cows in cowsheds does allow better control over waste management and losses. In many parts of the world, organic waste is collected and taken for processing to specialized treatment plants, becoming a source of energy and fertilizers.

Other aspects to consider when thinking of breeding cow programs are the ethical concerns involved with an animal’s life of slavery and the terrible conditions and slaughter often used.

Other health concerns often raised in regards to beef production are the antibiotics given to the animals and their impact on the consumers of these meat.

Poultry breeding is considered more environmentally effective than the cattle industry. However, it requires farming large amounts of grains as feed. Also, for economic reasons the animals are held in overcrowded cages and often undergo severe changes such as breaking of beaks and claws.  Here, too, due to overcrowding and infection, it is necessary to use large amounts of antibiotics to avoid the outbreak of diseases such as salmonella. This types of intense breeding programs often cause the destruction of whole coops due to epidemics such as avian flu.

But even if remove the moral debate from the discussion, there are disproportionate amounts of resources invested in animal breeding, the environmental impact they cause, and the limited satisfaction of the human populations needs. And since the world’s population is still expected to grow, we must get creative and find suitable protein perhaps insect proteins or laboratory synthesized solutions. 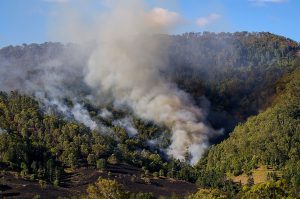 The largest wildfire New Mexico started because of controlled burns

The U.S forest service was pressured to meet objectives, making them ignore risks and start controlled burns. The burns span out of control and caused

Does your dog breed affect its personality?

New research shows that the dog’s breed has very little to do with its personality. The research compared pure-breed dogs to mix-breed dogs and indicated