The Snows of Kilimanjaro are no longer

When Hemingway wrote his short story, “The Snows of Kilimanjaro,” in 1938, he did not imagine that 80 years later these same snows would disappear. Kilimanjaro, the highest mountain in Africa, is rapidly losing its famous ice dome—one of the popular icons of the Black Continent. The thousands of climbers who ascend to its gleaming summit each year understand that they are the last generation to be able to personally recount experiencing the glaciers and snow at this African summit, located near the equator. According to scientific forecasts and studies, the huge glaciers at the top of the mountain are expected to disappear completely by 2040. The accelerated melting rate, which stands at about half a meter per year (1.6 feet a year), has led to glacier cover shrinking by 80% since 1912, when scientific documentation of the mountain began. The snow covered area that inspired Hemingway’s famous story now amounts to only about 2 square kilometers (0.77 square mile).

Climbing to the summit of Tanzania’s Kilimanjaro is likened to walking from the equator to the South Pole. The hiker crosses five distinct geographical environments in a matter of days, from the endless savannah plains, through the coffee and tea plantations, the thick rainforest, the prairie grasslands and the alpine desert, before reaching the snowy and frozen mountain peak that rises 5,895 m (19,340 feet) above sea level.

Kilimanjaro, a dormant volcano, is also considered the highest free standing mountain in the world meaning that it is not part of a mountain range. It exceptionally stands out above the flat grounds below it. This prominence might be the source of the name “Kilimanjaro”, which some say originated from the Swahili words “Mount of Caravans” (Malima Najaro). The Arab merchants who led their convoys from the coastal area of East Africa to Lake Victoria saw this mountain as a landmark, both because of its great height and because of the gleaming dome of ice at its head, which is sometimes visible up to a distance of 200 km. 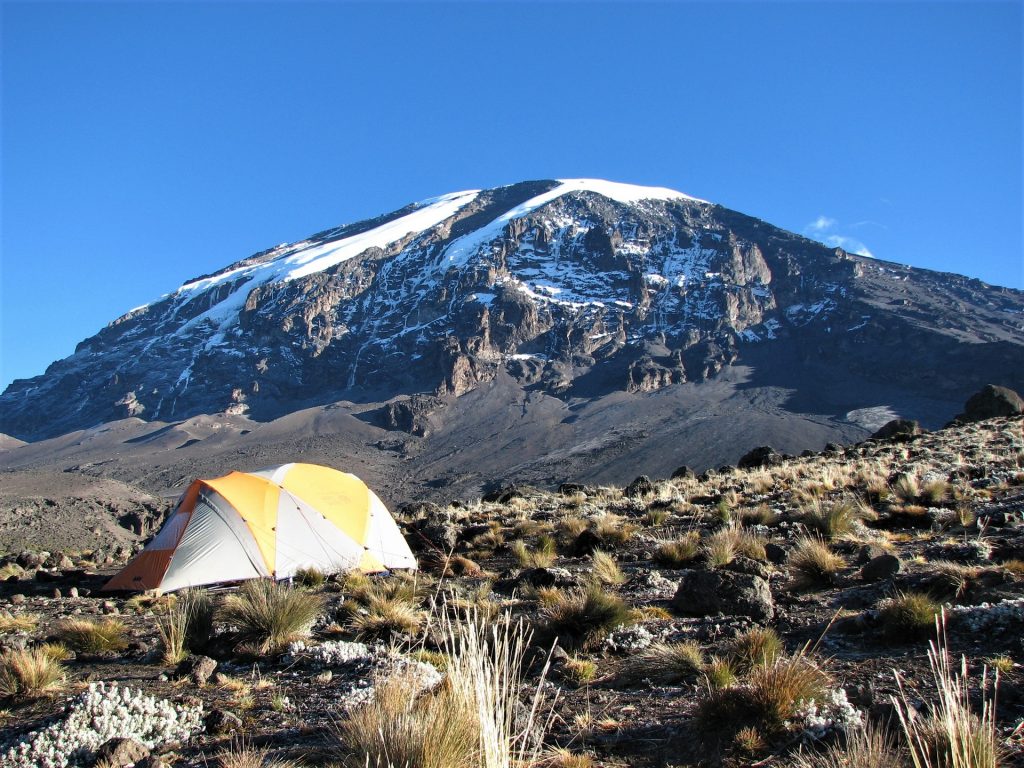 The gateway to Kilimanjaro is the agreeable city of Arusha, located near the Kenyan border with Tanzania. Spending time here, between the bustling merchant shops and the scorching sun makes it is hard to imagine that at the top of the nearby mountain the temperatures drop below freezing and blizzards are a matter of routine. The locals, members of the Chagga tribe who live at the foot of the southern slopes of the mountain, say that until the white man came here in the mid-19th century they did not dare dream of climbing to the top of the mountain for fear of God’s wrath. “Ngaja Ngai” in their language, meaning “House of God”.

The first European explorer to “discover” the mountain was the missionary Johannes Rebmann, who in 1848 stood at its foot. His reports, sent to Europe, of a glacier capping the top of a huge mountain on the equator, made him the object of ridicule and scorn. However, his stories also motivated the urge for travel and adventure bringing several other scholars to the area. Subsequently, a number of climbers, missionaries and adventurers tried to climb to the summit, without success.

It was not until 1889 that German geographer Dr. Hans Meyer succeeded in conquering the summit, after several failed attempts. On the 6th October, accompanied by Ludwig Purtscheller, an Austrian mountain climber, they made it to the summit’s southern rim. The expedition forced its way through the frozen cliffs and carved a passage between the glaciers. They reached a small dome towering over a large crater, in its center they discovered the dormant volcano’s opening. Out of breath from excitement or from lack of oxygen, the two explorers shook hands, waved the German flag and named it “the summit of Kaiser Wilhelm”. Eventually, with the declaration of Tanzania’s independence (then Tanganyika) in December 1961, two young Tanzanian officers would climb to the very summit and launch fireworks to symbolize the birth of the new state. From then, the summit of Africa will be called “Uhuru Point” (Liberty).

The climb to the top of Mount Kilimanjaro attracts ten thousand hikers a year, and brings in over ten million US Dollars (a year) to the Tanzanian economy, a considerable amount considering that Tanzania is one of the poorest countries in the world, with an average annual income of several hundred US Dollars per capita. The climb, which follows the path set by Mayer at the end of the 19th century, lasts about five days and is considered relatively comfortable, but only about 75% of hikers manage to climb to the summit and see the Kilimanjaro snow from the mountainous summit.

Nonetheless, Africa’s most famous mountain has long been known not only as an adventure destination but as the topic of public and scientific debate over the global warming problem plaguing the planet. Since the year 2000, Prof. Lonnie Thompson, a paleoclimatologist and earth science researcher at the Ohio state University, has been conducting an ongoing study that monitors the glacier condition in Kilimanjaro. As part of the study, ice drilling was carried out and 6 samples were taken from it to a laboratory in Ohio, where the ice organic and chemical components were analyzed and from which information about the Earth’s climatic history was extracted. Thompson believes that the glaciers found at the highest mountain peaks and at the poles are a time capsule that hold rare information about the history of climate change. The study’s findings, accurately point to three extreme warming periods that caused drought and extreme dry periods: 8,300, 5,200 and 4,000 years ago. According to the researchers, these dry periods directly affected humanity’s migration and economy across the globe The most immediate and noticeable display of these historic climate changes is the retreat and melting of glaciers all over the world. The concern is that today we are in the midst of a severe warming period, which some contend is beyond climate variability.

Thompson’s alarming findings and conclusions that referred to Kilimanjaro made it one of the symbols of the struggle to prevent global warming. Following the study, the Greenpeace organization held a press conference at the top of the mountain in November 2002, which was broadcast in Marrakesh, Morocco, to the international conference on climate change taking place there. In October 2003, during a Senate debate on a bill to curb greenhouse gas emissions, Senator John McCain presented old photographs versus newer ones of the Kilimanjaro summit to illustrate the rate of global temperature rise and glacier melting. These images of the snow dome disappearing from Kilimanjaro have even earned a place of honor in Al Gore’s film “An Inconvenient Truth.”

Alternatively, some argue that this is yet another false theory made up by politicians and scientists using the melting snows of Kilimanjaro to establish a thesis that has not been scientifically proven. According to this position, supported by Prof. Georg Kaser of the University of Innsbruck (Austria) and Dr. Douglas Hardy of the University of Massachusetts, the use of the Kilimanjaro findings to justify the claim that human activity causes global warming is misleading and wrong. According to them, the earth has undergone natural warming processes in the last 120 years that are not directly related to human activity. These scientists believe that the glaciers at the top of Kilimanjaro are a historical relic of the ice age of about 11,000 years ago and are disappearing because the climate in East Africa is much drier today than it was in the past, which significantly reduces the amount of snow falling at the top of the mountain. In addition, the dry air reduces the thickness of the cloud layer, thus enabling higher penetration of solar radiation that quickens the glacial melting. According to them, the accelerated melting process began naturally in the late 19th century (when there was no greenhouse gas emissions) and it would have occurred regardless of human activity, though perhaps at a slower pace.

The difference between the researchers’ conclusions does not change the fact that the data and facts are clear and that the tropical glaciers in Kilimanjaro, Mount Kenya, the Andes, Tibet and China are disappearing at a very fast pace. World environmental activists, economists and heads of state understand today that this phenomenon causes not just economic and touristic damage, but also a real existential danger, as these glaciers serve as a source of water for agriculture and affect the livelihoods of millions of Third World people. Unfortunately, not much can be done to stop the process, at the end of which all of humanity will lose one of the Africa’s most beloved symbols established by Ernest Hemingway. 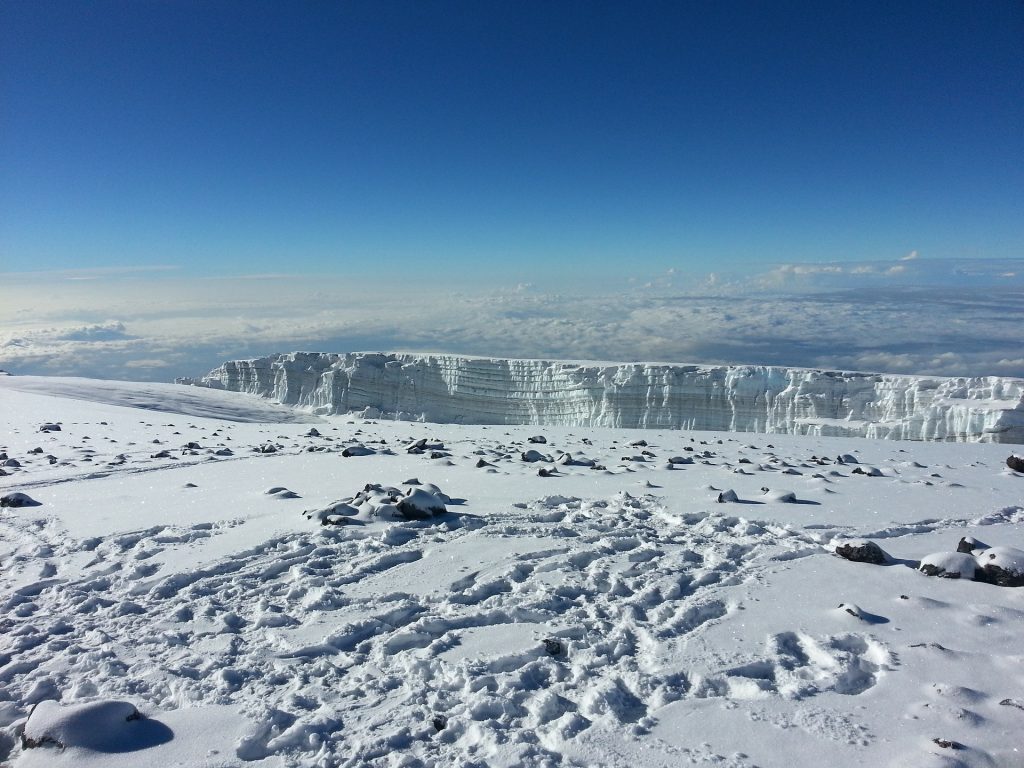 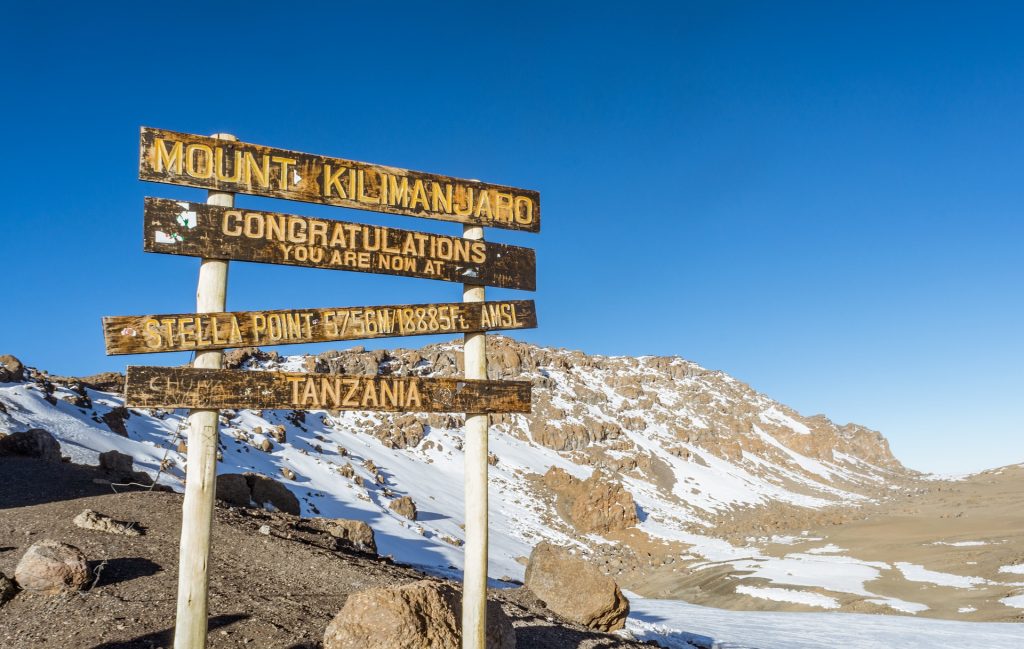 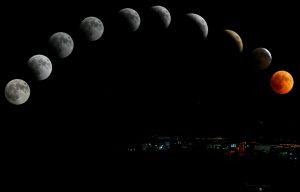 This Monday make sure to look up to the sky

In the early hours of Monday, before dawn, the earth will come in between the sun and the moon, creating a full lunar eclipse, which 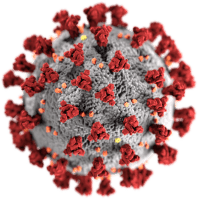 In recent weeks, the news has dealt mainly with the novel Corona virus. As time goes on, the war against the virus intensifies, its presence

Rainwater is unsafe to drink

A study done at Stockholm university shows rainwater worldwide contains too many PFAS chemicals and is unsafe to drink. PFAS chemicals, also known as forever